Continuing in my theme that I write about "nothing in particular" I'd like to begin by saying that there are a lot of perfectly good things to have with your morning coffee.  May I be so bold as to suggest that you have a healthy dose of Laura Nyro with your coffee?  Any day that starts with her sweet voice in your ears is automatically a good one, regardless of what follows.

Having said that, I was absolutely hopping mad on Tuesday evening to learn that a breed ban had been passed at the Montreal city council meeting.  These bans are bad for everyone - they punish perfectly behaved, loving family dogs and the folks who love them.  You want to crack down on "dangerous dogs" try cracking down on the pond scum who betray these beautiful animals and allow them to be in situations where they are reactive and "dangerous."  There is no such thing as a dangerous breed but there are dangerous, ignorant people.  They should not be allowed near innocent animals.  I'd like to encourage you to sign the petition below and ask that this ban be overturned before dogs in sheltered are killed for no good reason.

Montreal, I love you.  I love visiting you, I love waking up in you, walking your streets, listening to your music, eating your food, meeting your people.  You are one of my favourite cities.  I'm sure I'm not alone in saying that until this stupid ban is overturned, I'll not be visiting you.  C'mon Montreal, wake up and smell the kibble!!

It was 10 years ago this week that we said good bye to Mark's dad, Joe Collis.  He wasn't a Joseph (despite my dad really wanting to call him Joseph!), he was "just Joe." He used to his joke that his parents couldn't afford to give him a middle name. 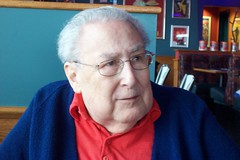 I met Joe the week after he had buried his lovely wife Ida.  He was pretty much shattered by her death.  Joe's body was beaten up from the many months of taking care of his Ida while ALS ravaged her body.  That first time I met Joe, he was pretty frail and still in shock over Ida's death.  I was pretty nervous about meeting him, not just because he was Mark's dad but because the meeting was happening so soon after the death of his wife. Mark's niece and nephew were there (we met for dinner) and that helped break the ice and put us all at ease.  About half way through dinner, Joe leaned toward Mark and loudly whispered, "I don't think she's Jewish."  I smiled and pretended not to hear.  Mark just glared at his dad and then we both laughed.

Even though I was a shiksa, Joe accepted me and we developed a friendship.  He allowed me into his life and accepted that I was in love with his son and was probably going to be around for a while.

When we opened our restaurant in Kingston, named "Ida's Kitchen" to honour his bride, he was thrilled.  We even had Ida's Kitchen business cards made up for him (her face was our logo).  Joe and I had long conversations in the years that followed about their love story (Ida was 16 when they married and they needed a special document signed by her parents to give them permission to marry)  and their wonderful life together (winters spent in Florida, summers in Belle Ewart, cruises, trips, every day things...).  He never got over her death and I know he believed that they'd be reunited when he passed away.  I don't believe that but I'm so glad that he took comfort from that idea.  After almost 60 years of marriage, he hung around for another 7 without her.

About 2 years after Mark had moved to Kingston, Joe decided to make the move too.  We were really happy to have him close by.  Mark and I wanted to be able to help him out and keep an eye on him.  Looking back, I'm so grateful that we had those years together with Joe in Kingston.  I really got to know him and love him.  Mark and Joe always had a tense relationship (Mark was much closer to Ida than he'd been to Joe) but I know that they both loved each other even if they didn't like to talk about stuff like that.

I miss Joe a lot.  There have been so many times over the years when I have thought, "boy Joe would love that!" and I have to remind myself that he's not here.  It makes me really sad to think that Joe and Ida and now, both of their sons are all gone now.  10 years is a long time.  It's longer than I even knew Joe. He really was one of the good guys and I'm sure I'm not the only one who is missing him and remembering him this week.

hiatus and a new year

So, I guess I took a hiatus.

It wasn't planned, it just happened.  In many ways, August was really awesome and it totally sucked at the same time.

I had three weeks of "stay-cation" in August.  I spent time with people I love.  I laughed, a lot.  I cried a shit load (mostly for a couple of days in mid-August).  I enjoyed good music.  I floated in a big ass swimming pool on multiple occasions.  Had a couple of small solo road trips (the adjustment of being the pilot after so many years of being the navigator is easier than I thought it might be).

I realized that going forward, the actual day Mark died is not the one that is going to gut me but the day before he died.  That last day we had together.  I relived every second of that day in my mind again this year.  It felt like it was all happening to me again.  I hated that.  A few days later I was okay but boy, at the time, it was hard to see the forest for the fucking trees. 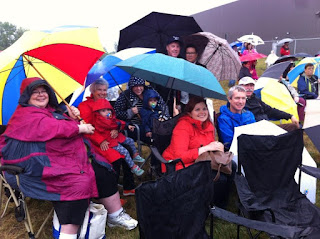 A couple of days earlier, I'd spent a deliciously cool (temperature and otherwise) and soggy day with some of my cousins in Smiths Falls.  We attended the "Front Lawn Shindig" that had been hosted by the wonderful folks at Tweed.  We sat in our lawn chairs, huddled under umbrellas while a desperately needed rain fell on us.  Soaked to the skin but smiling, we listened to music and laughed and just enjoyed being together.  It was a fantastic day.  I got to see all of my "Forbes" aunts and uncles and a good number of cousins and my brother was even there for a bit.  Family.  Mine is the best.  They are the shit I tell you.  Love love love them! Oh, and the Joel Plaskett Emergency were awesome too (thanks to my sweet cousin Kelly for the fab photo of us).

And now it's September.  Frosh week is folded up and put away for another year. Students are in class (and in the stores and bars and coffee shops).  We've seen the long awaited return of cool nights and sunny warm days.  I love this time of the year.  I'm having fun and I can go for several days now without having a little cry.  Progress is a beautiful thing.

January is officially the new year but I feel like my new year begins in September.  So far it's off to a great start.  Chaos may swirl around me but I don't get pulled into it anymore.  I'm not sweating the small stuff.  I'm fresh out of fucks to give about things that really, at the end of the day, don't matter.  As Joel Plaskett says, everything'll work out fine.